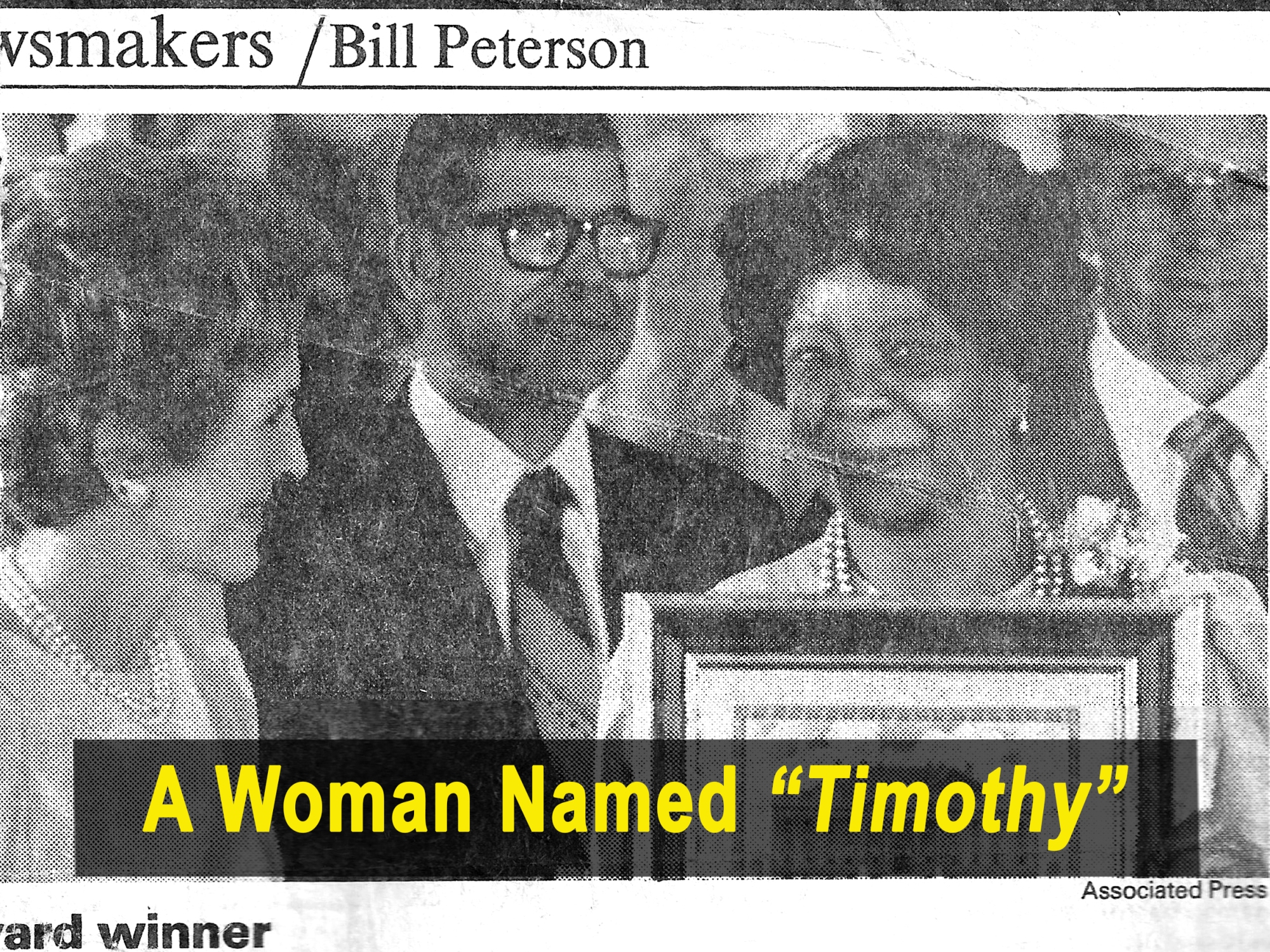 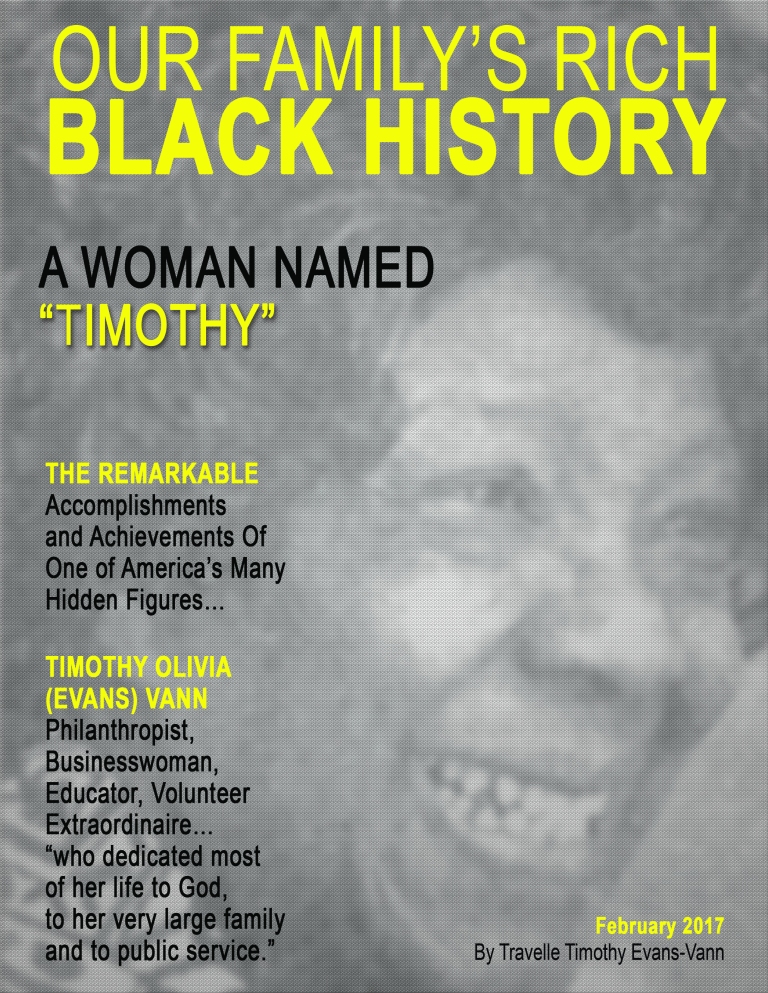 Timothy was raised in a household of deep faith/s in Kansas City, Missouri. Named after her paternal Uncle “Tim” (Timothy Evans).

Her parents, particularly her father, mandated that Timothy pursue a post-secondary education. For the time/era in our country’s history, it was most remarkable that a Black man–born/raised in the era of the Jim Crow South–would encourage his daughter to matriculate and achieve & excel in the milieu of higher education.
She chose to attend a historically Black college and earned a
Bachelor of Science, Physical Education, 1934
Langston Hughes University
Langston, Oklahoma

As a Langston Hughes University Co-ed…

During her time as a professional dancer, Timothy met her future husband, *John “Roscoe” Vann. A professional drummer, he was often requested to ”session” and/or play with the various famous bands when they performed in Kansas City.
*Roscoe became ill long-term and passed away suddenly. This left Timothy to raise her children as a single mother. With children in tow–and in one car–the newly widowed Timothy and her children moved their lives north to Saint Paul, Minnesota.

Very Important Note: Driving while Black, in a car filled with young Black children from Missouri to Minnesota, was a leap of great faith! John A. Williams, author of This is My Country, described accurately the potentially precarious situations and ever-present dangers of intrastate/interstate travel [by all modes of transportation] for ‘Negroes’ in the racially segregated 1950’s. “It was usually dangerous – “White travelers have [no] idea how much nerve and courage it requires for a Negro to drive coast to coast in America.”

A convert/devout Roman Catholic, Timothy sought out a church home for herself and the Vann children in Minnesota. (All ten children–yes ten [six girls; four boys]—were baptized in the Roman-Catholic faith. However, [she often stated] by divine providence/intervention, she found herself at The Rectory of The Cathedral of Saint Paul. “The Cathedral” was/continues to be the Cathedra (chair=seat) of The Archdiocese of Saint Paul and Minneapolis. She and her family received a warm & genuine welcome from the rector/monsignor/priests/parish staff! It was apparent to her that The Cathedral Parish–also comprising a grade school–would became/continues to be her family’s lifelong church home.

Thus, Roman-Catholic educations for the children continued in Minnesota. As a single-income working mother, these costs provided occasional challenges of her. Regardless of temporary hardships, she paid all tuitions & fees without the benefit of subsidies or outside financial assistance.

In addition to raising her own family, she was often sought out by other parents/families [of all races/colors/ethnicities] experiencing difficult circumstances. Their wish was to have Timothy care temporarily for their child/children until their respective situations improved. Rarely were these requests ever denied. To date, many of these youths literally consider themselves actual members of “The Vann Family.” 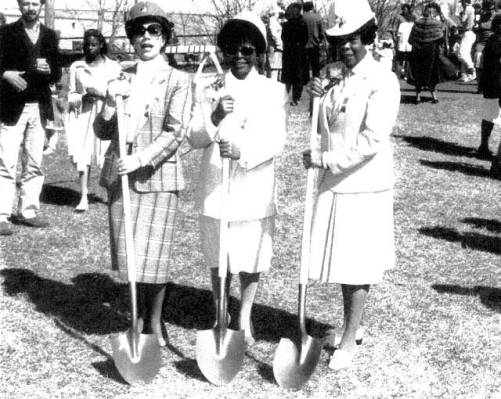 My Grandmother on the right at a Groundbreaking Ceremony.

Known simply as “Mrs. Vann”, or affectionately as “Ma’am”, Timothy was recognized for her parenting skills and her well-turned-out children. In 1983, she and her family were awarded with three–yes three-–“family of the year” honors! (Family Service of Saint Paul; the National Urban League; American Family Society (AFS).)
Nine of 188 families nominated, were selected by a distinguished panel of experts from the areas of entertainment, religion,
social services and the philanthropic & charity communities.)

Mrs. Vann continued to be recognized throughout her life for her: Character; Faith & Spirituality; Love for all Humanity; and Compassion for the Human Condition. Her Societal Impact locally, nationally & internationally includes an astonishing and enduring legacy of Mentoring, Coaching (grade/high school athletics; Member, Hall of Fame: Catholic Athletic Association (CAA) of Saint Paul–second largest CAA in the United States), Community-Building, Political Activism and Financial Acumen.

One Example: She worked tirelessly–and with some political prejudice against her–with Senator Durenberger to help resettle Southeast Asian refugees (Hmong [Cambodia], Laotian, Vietnamese) to Saint Paul.  A primary concern of Mrs. Vann’s was access to high-quality healthcare for all individuals regardless of their ability to pay. As 11-year Executive Director/CEO of the Model Cities Health Clinic (now Open Cities Health Center), she made history early by ensuring that “Model Cities” was one of the first local healthcare facilities to openly welcome & serve these new Minnesotans! Model Cities was also one of the first entities to employ these Southeast Asian refugees.
(First Hires: Clinic van drivers [also language translators] to transport these traumatized populaces to the clinic.)

In the midst of her volunteerism, successful career as the Public Information Officer for the Saint Paul Housing and Redevelopment Authority, and while raising her–and others’–children, Timothy followed her passion for lifelong learning by earning a
Master of Arts Degree, Public Administration (December 15, 1971)
Hubert H. Humphrey Institute Of Public Affairs
University of Minnesota-Twin Cities Campus
at the age of 54!

With her newly acquired credential in public policy & administration expertise, this  brought forth a request by city officials [Mayor’s Office; Public Health Department] asking for her to serve as Executive Director/CEO of a new city healthcare initiative. It was to be called the Model Cities Health Clinic. The clinic would be: community-based; targeted toward underserved populations; located in the heart of the historic Rondo community. It would also be housed within the newly constructed/still extant
Martin Luther King, Jr. building.

Due to expanded healthcare services provided, e.g., dental/optical, and growing/additional constituents’ needs, Model Cities outgrew its original space. Now known as Open Cities Health Center, or ”Open Cities”, the health center has relocated to a much larger building still within the environs of S-U. Open Cities has added additional satellite facilities/clinics beyond S-U to other Saint Paul communities where affordable healthcare is still a need.

One of several capstones of her tenure at Model Cities was the establishment of the Timothy O. Vann Endowment Fund. The fund’s purpose was/continues to aid low-income patients by offsetting individual/family healthcare costs.

George Halvorson, former president and CEO, Health Partners, Inc, (most recently,
Chair and CEO of the Institute for InterGroup Understanding and one of the principal architects of former President Barack Obama’s Affordable Care Act said of her tenacity, expertise & value as a board member:
“She was committed to providing equal access to health care and made sure we serve the entire community,” and “She set very high standards and influenced everything we did on the board.”
All which demonstrated her genuine desire to improve all lives.
Yes, all lives mattered to her! This was not a passive sentiment; it was her way of life!

The number of “continuing education” courses, workshops & conferences Timothy attended–many as featured presenter/speaker/panelist–and certificates she received is exhaustive and truly too numerous to elucidate! However, by sheer numbers alone, it is evident that her parents’ credo of pursuing “lifelong education” stayed with her throughout her 83-year life.

Retired Rector, Reverend John Estrem said of her,
“The Cathedral was a second home to her, she always credited her successes to God.”

Timothy was interested in all people/all subjects. Regardless of their situation or circumstance, she treated everyone–fauna & flora, too–with great dignity! Paying it forward, she instilled & imbued into her children/grandchildren these same character traits and encouraged them to strive for excellence in all facets of their lives. Whether the interaction was brief or continuing, she was known widely, revered/respected highly & well liked by nearly all with whom she would come into contact. The standout qualities & character traits admired overwhelmingly and cited most often by others when referencing/referring to “Mrs. Vann”: deep faith; genuine spirituality; razor-sharp intellect; and intellectual curiosity.

Be they prominent business leader, educator, clergy, civic leader/eminent politician, or one less fortunate and/or seriously grappling/struggling with life’s various issues,
ALL found Love and a Friend in “Timothy.”

My Grandmother with all 10 of her children in one place – miraculous!
(My Mother: woman at top left)

Our Mother
Our Grandmother
Our Advocate
Our Mentor
Our Friend 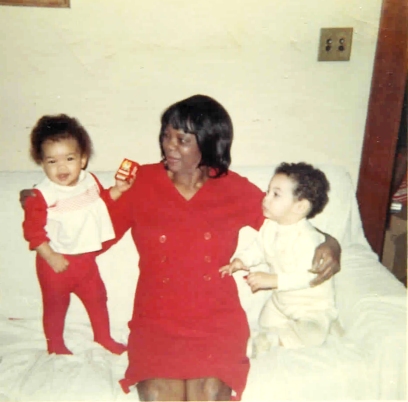 My cousin Dakota and I (on the left) with our Grandmother.

Thanks for reading, and honoring those who came before us.

MORE OF MY VLOGS & BLOGS HERE

Go back to HOME PAGE
or use menu in upper right corner.